Guitar students often ask about the difference between “sweep” picking and “economy” picking and it seems these terms can cause a little confusion.  Sweep picking is actually just a result of applying the principles of Economy Picking to an arpeggio where the notes lie across the strings (hence the term “sweep picking” because if the notes lie on consecutive adjacent strings, then effect is for the pick to “sweep” across the whole group of notes in a single motion).

Economy picking is really very simple.  There are only two basic principles to remember:

You should also note that picking every single note can start to sound a bit tiresome, so it’s okay to include some slurs (in the form of hammer-ons, pull-offs or finger-slides) as they can help to smooth out the sound.

You’ll probably find it useful to write out any line or exercise you’re working on, indicating all the left-hand fingerings, down and up strokes, slurs, etc.  Then practice it very slowly for awhile until all the motions flow naturally, then increase the speed.  At first you may want to just practice short fragments of the lick (3 or 4 notes) until the pick glides over them and each note sounds with clear articulation.

When starting out, some of this might feel a bit strange, so remember to go slow at first.  If you take you time it becomes quite natural and after a while, you won’t even think about it.

Here are some examples (with picking indicated): 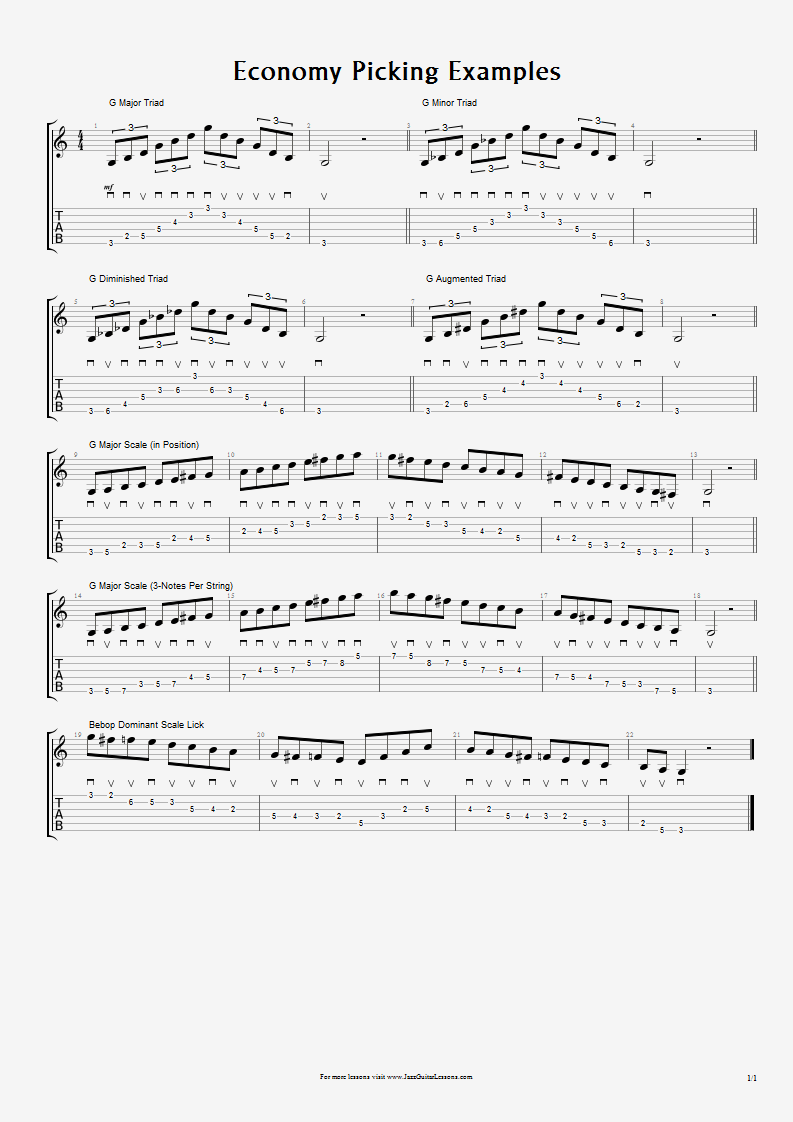 About the Author
About the Auther: Rick Stone is a jazz guitarist working and teaching in the New York City area for over 30 years. He has performed and recorded with Kenny Barron, Eric Alexander, Ralph Lalama; appeared at the Blue Note, Birdland, Carnegie Recital Hall, the Smithsonian, the East Coast Jazz Festival, Kennedy Center; and toured South America and Italy. His trio can be heard regularly in NYC at the Bar Next Door and the Garage Jazz Restaurant. Their latest release “Fractals” made JazzWeek’s Top-100 CDs of 2011. Learn more (and get a free MP3 and Transcription) at www.rickstone.com). Rick is available for private lessons and also teaches online lessons via Skype (vist www.JazzGuitarLessons.com for details).
Social Share
2 Comments